To kick off our 2021 sports season, this week we had the pleasure of speaking with student athlete, Cayci Muessig.  Cayci is fourteen years old and has been playing basketball since she was eight.  As a freshman, she will be playing her first winter season for her high school varsity team at Ridgeline Academy High School.  When she isn’t on the court, Cayci’s hobbies include spending time with family, friends and volunteering. She also loves painting and crocheting!

Thoughts on this season 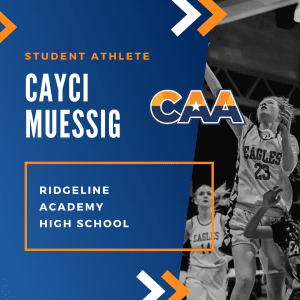 Cayci is so excited to be given the opportunity to play for her high school this year.  “I feel both fortunate and blessed to be on a team with coaches that believe not only in myself but the entire team. I couldn’t ask for better teammates and coaches”, she said.

Despite Covid restrictions, being able to continue playing basketball means everything to Cayci, especially as a freshman. It’s disappointing to not have the support and cheering from our fans due to Covid. However, being able to play is what is important to me. Now, more than ever, my team and I will be supporting and cheering for each other as players are subbed in and out of the game to keep up the energy, support and excitement. Our coaching staff does a great job supporting us as well!

First game of the season

On January 6th, Ridgeline Academy took on Paradise Valley Christian Preparatory (PVCP) to start off their winter season.  It was a great learning experience for both Cayci and her team. Going into the game we were 6-0. PVCP is the reigning Division 1 State Champs of 2020 so we knew going into the game they’d be a tough team to beat. The game started off a little slow. At the end of the first half the Eagles were up 17-9. Coming into the second half they picked up the intensity and worked more together as a team and moved the ball better to end the game 50-13. “I played very well, scoring 27 points, having 10 rebounds and 9 steals. It was exciting as I hit 5 three pointers, four of which were back to back in the second half!” said Muessig.

Lessons from her coaches

I have learned so many things from my coaches so far this season and we’ve only just started. I’ve learned to be confident with the ball and in my shooting. I’ve learned to work hard, play tough and always give 110% when I am on and off the court. I look forward to learning more from them and their many years of experience as athletes.

Plans for this season and the future

Cayci’s  goals this season are to have fun, work hard, and continue her development not only as a player but as a leader on and off the court. She looks forward to representing Ridgeline Academy to the best of her ability.

I would like to continue to play basketball for as long as I can. I hope one day in the future to work with animals. I would also like to help train and mentor young athletes as well.